Having spoken at various Boys conferences, Jeff Perera shares some stories of talking with boys from Grades Four to Eight.  Jeff also shares what happened when he spoke with hundreds of young girls on how created ideas of being a man impacts girls as well as boys. 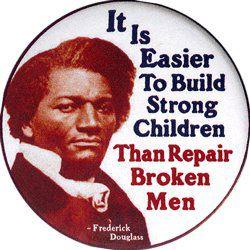 I spoke at an ETT conference in Toronto back in 2012 where my mission was to hang with a group of fifty Grade 4 boys, all day.

All Day. Just me. No sweat.

These boys from various parts of the city settled in, as their educators then went into their own day session.  A freckled boy with long red hair came by himself and sat down. A young boy then whispered loudly to his small group of fellow classmates at end of the room “Yo, is that a GIRL??”

Whenever I use this site and mash up TV commercials for an audience of young boys or girls, they first burst out in laughter and then erupt in conversation. They get it. They understand how products are marketed to them…soft, high-pitched voices for girls inviting them to be friends…aggressive adult voices calling boys to join them in battle.

Go ahead…you know you wanna take it for a spin. 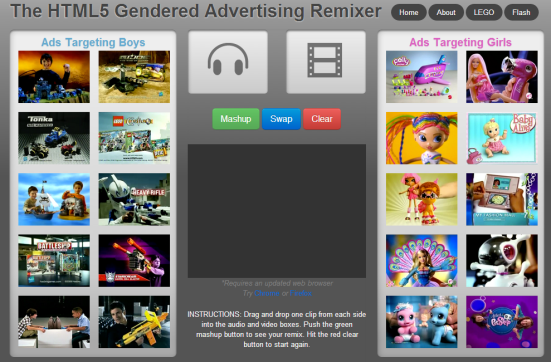 Next was an interactive portion I present in every talk or session I run with people of any age and walk of life is “What do you like/dislike about identifying as a certain gender” or “What do you like/dislike when people assign a gender to you based on your appearance?”  When I ask a younger group the question is usually “what do you like or dislike about being a boy or a girl” (We later discuss how this really isn’t a binary discussion, but your experiences in life are based on how many people will interact with you as either a boy or girl)

I asked this group of fifty Grade 4 boys to get into groups and answer the question. Here is the list from one breakout group of those Grade 4-6 boys: 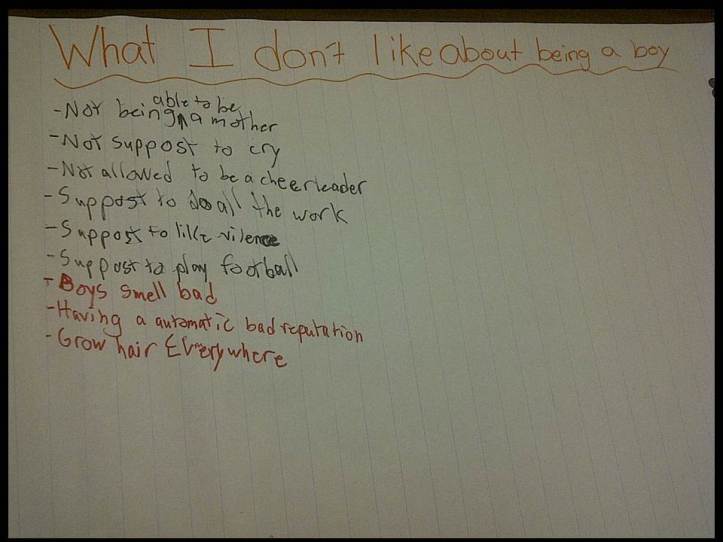 As you can see some of the boys pointed out pressing pet peeves like how ‘boys smell bad’ or ‘grow hair everywhere’. Many usually share thoughts such as how they don’t like that boys get very competitive, leading to aggressive behaviour or cheating to be labelled a ‘winner’.  In all respects, it is all about being a winner for boys, sometimes at all costs. Some will talk about how boys always are in trouble, as one boy indicated here with ‘…an automatic bad reputation’.

One particular answer stood out to me with this list.

It was the one at the top of the list : ‘not being able to be a mother’. I asked “who said this answer?” Usually one of the standard responses from boys of all ages during this exercise is how they like that ‘we don’t have to give birth’ (usually followed by a lot of head-nodding). A little fellow put his hand up, I asked him if he’d explain what he meant. This tiny thoughtful Grade 4 boy stood up to talk, the same boy who said he wanted to ‘be a politician when I grow up’.

He explained that when you see commercial for a baby dolls,  it’s always girls playing with the dolls and how boys don’t get to be mothers.

I said “…but you could be a Father? That’s what you could do…be a dad!”

He looked at me with a confused face as if I just spoke in another language.

My mind raced as I wondered just how many of these fifty boys had physically-present  but not emotionally-present fathers or role-models, or had fathers who were present at all. If they did hang out, they did little more than throw the ball around.

We need more Maps to Manhood.

When we reinforce outdated codes and ideas of manhood,  these young boys will strive to achieve a standard of being a man that ensures they will fail as a human being.

Some of the other pieces we discuss include how boys are pressures to assert their masculinity and prove their manhood in everyday activities everyday all day. This leaves us with a world of boys and men pretending: trying to achieve an unattainable state of manhood. 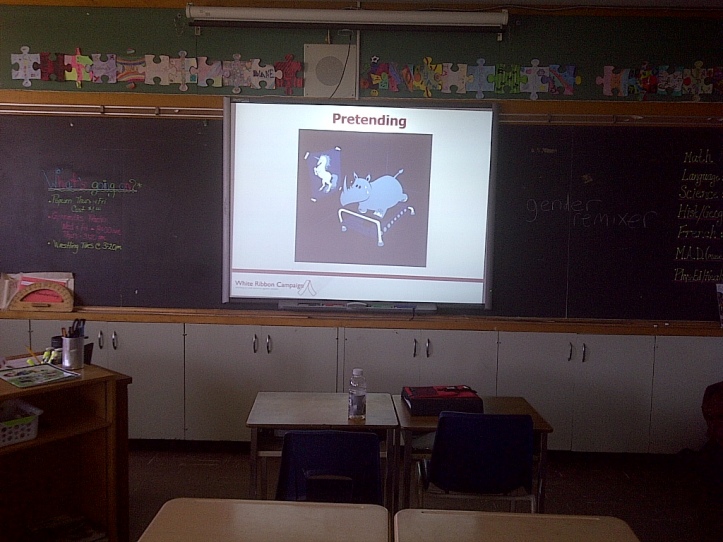 Ideas of being a man also include enforced notions and perceived ideas of masculine sexuality.  I vividly remember being 12 years old and an adult calling a bunch of us around to join him to drool and ogle at the bra section of the Sears catalogue. We stood around as if participating in a no-frills manhood-rite-of-passage, awkwardly knowing to nod and smile approvingly on cue. Ideas of Social norms and cues come from individuals in our lives as well as from the world around us. While girls struggle to understand how to handle the attention that comes with developed breasts or long legs: Boys struggle to understand what it is that they are supposed to be and not be in romantic, sexual and everyday encounters.

Paul Kivel first shared the ‘Gender Box’ for boys and men, since then folks like Tony Porter  and myself have give talks pointing out the narrow, impossible box men and boys are forced into by society.  At White Ribbon we speak about these gender boxes, in particular for men and boys, in pretty much every session we do. 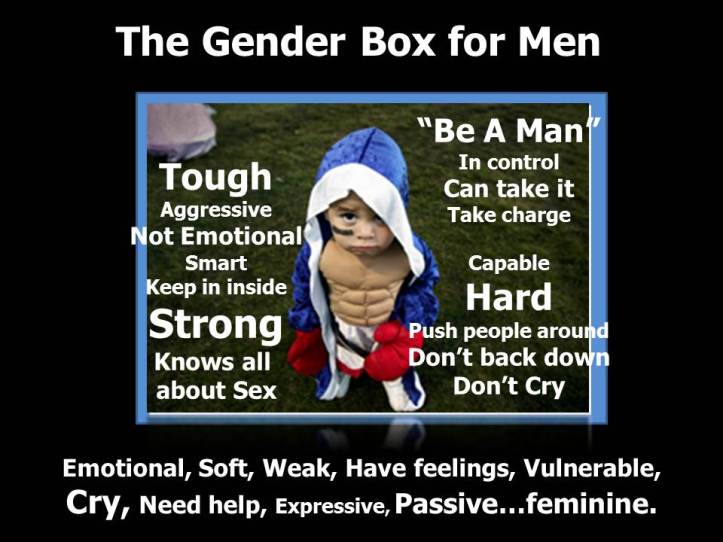 Discussing the Gender Box which girls are subject to is important as well. for both are created with the same stroke.

Many public schools across Ontario have been holding Girls conferences for years now, creating important spaces for young girls to explore issues such as self-esteem and body image. Boys Conferences are happening now as well. These are always great opportunities to connect with young men and boys. One experience really stood out for me, however, and it is an experience I hope to have again and again.

I had an exciting opportunity at Cheyne Middle School in Brampton, Ontario, Canada: I was invited to speak at both their Boys and Girls conferences. I had 250 boys for my morning keynote speech and then 250 girls in the afternoon for my closing keynote at their conference. In between that, I got to facilitate workshops with thirty Grade 8 boys and then thirty Grade 8 Girls respectively. Cheyne Middle School is a diverse space with students from many different racialized communities. I touched upon how power and lack of power in society impact the path of establishing identity for men and boys of colour (and in turn, realities for women and girls of colour).

For the workshops, I delivered almost exactly the same session for the boys as I did for the girls. I talked with the young women about the pressures and expectations placed on boys to walk, talk and act a certain way and how that impacts upon girls and women. I showed them a video of spoken word artist Shihan performing Love Like and we discussed their reactions to seeing a male who is excited and enthusiastic about love and being in love. I asked the girls what would happen to a boy who expressed enthusiasm about love in their school hallways, during recess or in the neighborhood: a boy not trying to play it cool and act all hard, but openly enthusiastic and happy. They said he’d be made fun of. I asked If they would laugh at a boy who acted or felt this way, half of them put their hands up. I asked if this was an example of how they would want their partner ( regardless of sexual orientation) to feel about love and being in love.

All thirty girls put their hands up.

I then showed a favourite video of mine to use in sessions with everyone. It is Tupac Shakur at 17 talking about how to approach a woman with respect. This was shot before violence wrapped its hands around him and pulled his life, body and soul apart and ended his life. I have written before in details about this video as being a living snapshot of young men at the crossroads of embracing or rejecting destructive concepts of manhood and masculinity.

Watch the video below.

After the video, I asked the girls what would people say at school about a boy who sounded and talked like this in the hallway or out in the field or in class? Someone who was being himself, respectful and wearing his vulnerability on his sleeve?

They said he would be…

Half of the girls admitted they would laugh at him as well. I then asked the girls if any of them would consider this an example of an ideal partner or (regardless of sexual orientation) would want to be in a relationship with someone who acted and talked this way.

All thirty girls put their hands up.

Earlier, when I did the same workshop for thirty boys, I asked them “what would happen to you or to any boy who talked that way?” They similarly said that they would be harassed, made fun of, called gay or a fag and that most boys would not consider this what a girl wants to see either.  We all know of the pressures they face outside the classroom from external sources to conform to strict ideas of being a man as well. One boy sitting in the back defiantly stated that he would not harass or harm such a boy, but would respect someone who talked and acted that way because he was being real and he was courageous enough to be himself. The teacher afterwords explained in amazement to me that this was ‘a troubled boy’ and was blown away that he, of all students, shared that comment with such sincerity.

I was invited to speak at one Girls Conference in Toronto before, but the invitation was declined when organizers later decided that it would be better for the young girls to hear female voices. I agree that we need to hear women’s voices and encourage young girls to raise and value their own voice. Male voices are always placed at higher value that women’s voices, but hearing how these issues impact ‘the other side’ from a male voice can be a key piece in some spaces of discussion as well.  After presentations in co-ed spaces, many girls will come up to me after to share words of thanks. Many offer appreciation for a male bringing up these conversations and creating spaces where boys can hear girls discuss their everyday realities as well as a space for girls to hear and understand the pressures boys are under to be a certain way. These aren’t just women’s or girl’s issues, they are ALL our issues to hear, learn, understand and help address.

After my keynote for the girls conference at Cheyne, one girl said to me “You know, It’s great that we have these conversations and discussions about body image and learning to love ourselves for who we are as young girls. I realized today we need to do the same thing with boys”. She flexed her arms and pointed to her biceps. “I realized I need to think about how I think of boys, what I think is attractive and what I want in a partner.” She said that she realized that a man doesn’t make for a good partner or is capable just because they’re physically strong or look a certain way.

Finally, one soft spoken girl approached me and, under the safe cloak of a one-on-one conversation, asked me.

“Do you think girls can also help change what boys think and feel?”
My enthusiastic yes was met halfway by her widening smile.

Together, we can change this world. 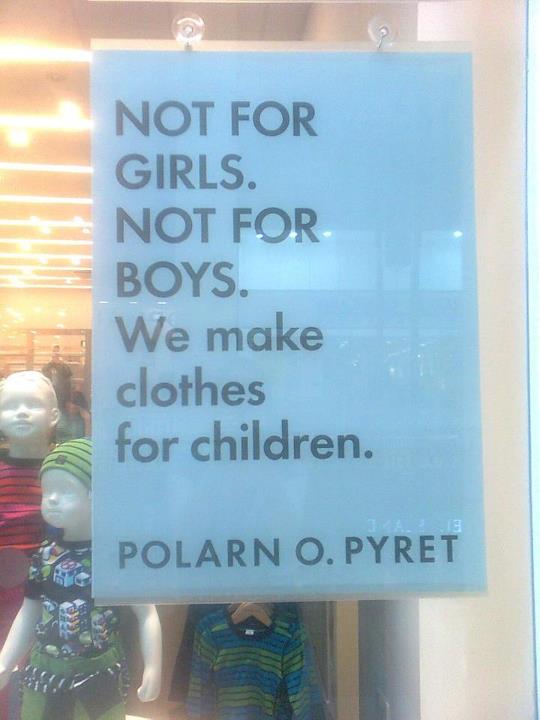 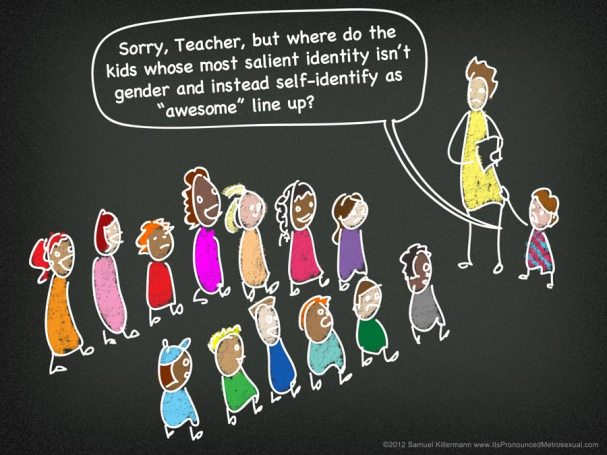 Let’s encourage men to embrace being the positive influence they can be in a child’s life. 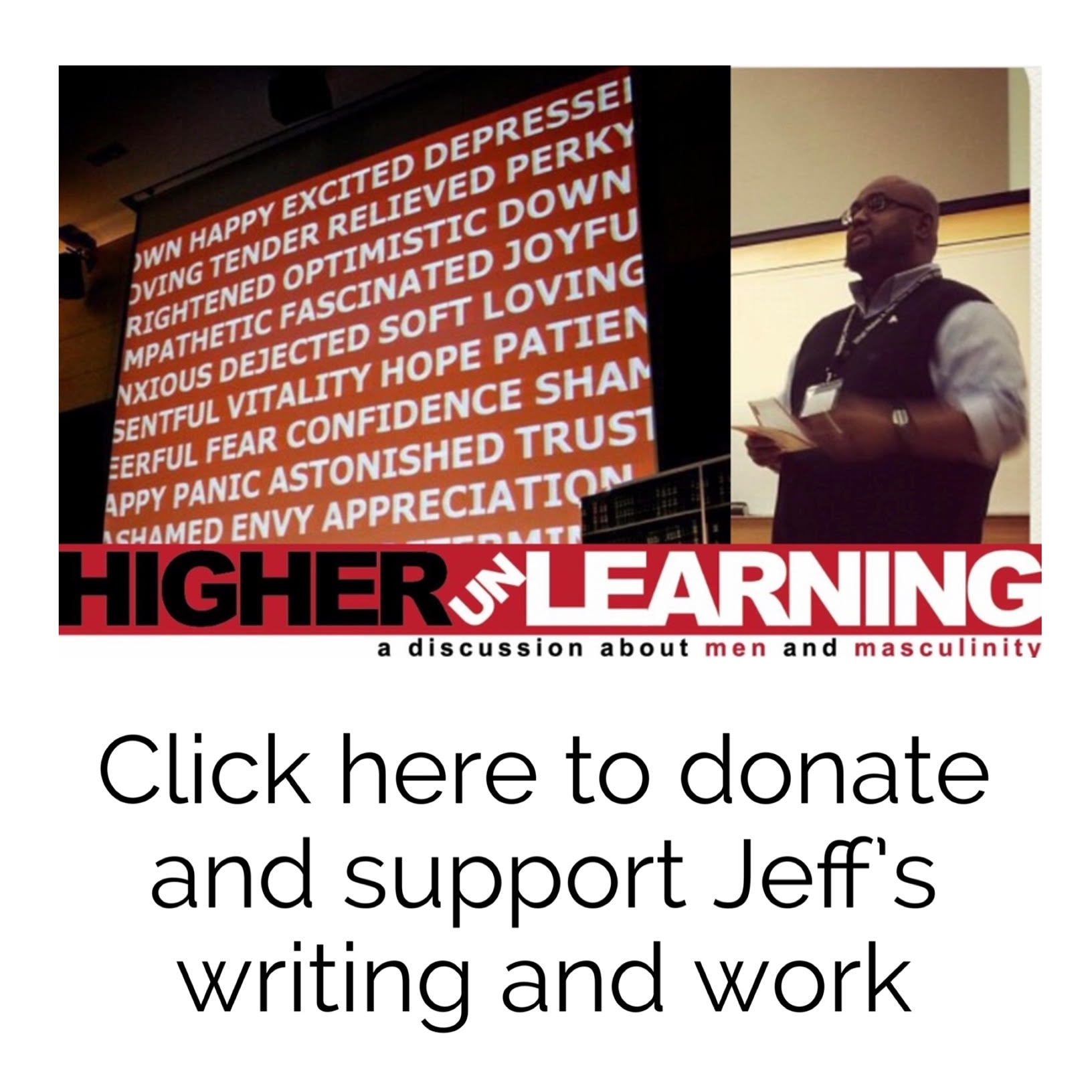 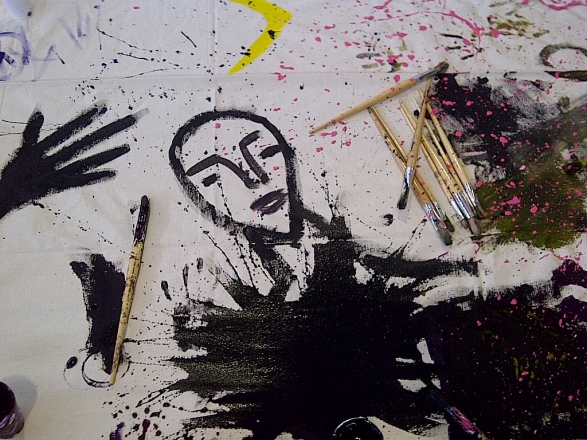 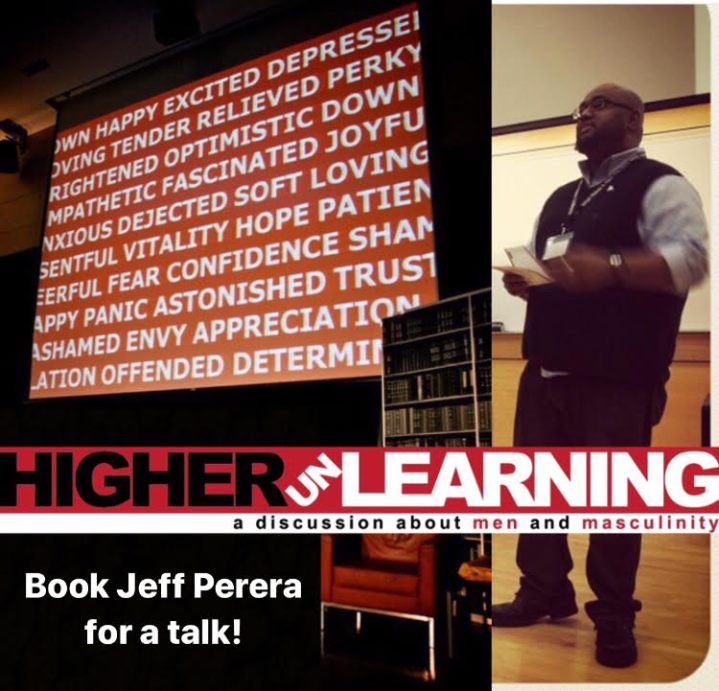